Every four years, Iowa becomes the center of the political universe in a unique spectacle known as the Iowa caucuses. But the folksy, county-fair tours of the past where front-runners and dark horses mingled with farmers, teachers, and union workers are under threat as the lure of unlimited dark money contributions gives deep-pocketed special interests more and more influence.

Iowa Pays the Price emerged as a nonpartisan, grassroots voice to demand accountability from politicans and show how big money was often working against the issues important to everyday Iowans.

Founded just a few months before the caucuses, Iowa Pays the Price needed to rely heavily on digital and social media to organize, engage and raise awareness of a critical campaign issue.

Making Main Street Count as Much as Wall Street

We needed a consistent brand that could work across a wide variety of digital and print products -- from websites and display ads to t-shirts and placards. Our friends at Action Backed developed a number of concepts, but one idea clearly stood out. We wanted to show how everyday Iowans were losing their voice in the political process and artwork with dollars signs and zeros obscuring traditional Iowa scenes definitely drove home the concept. 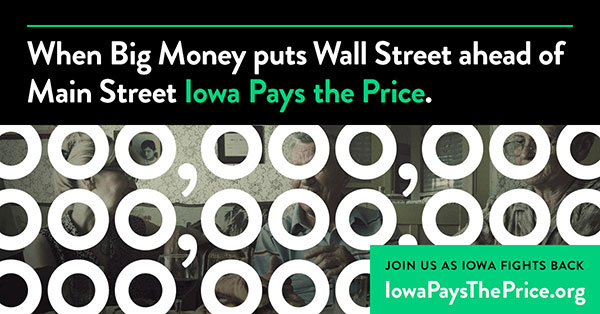 Working with Action Backed, we created a WordPress site that could serve as a billboard for the organization and its mission. We used a compelling short video to quickly explain our mission and prominently featured a sign-up form to encourage people to join the movement. We knew email would be important to this campaign so we put significant effort into list building through a series of acquisition ads. We launched Facebook, Twitter and YouTube accounts and used a variety of organic and paid promotion to help build a following.

We knew that there was no way we could match special interests' financing so we focused on building a grassroots campaign with strong volunteer efforts. We built advertising campaigns to drive targeted audiences to content that featured authentic Iowa voices.

Our field staff traveled across Iowa to assess each candidate's position on commonsense campaign finance reform. Armed with smart phones, they visited town halls, county fairs, and soapbox tours to ask tough questions to the candidates and get their answers on video. Through these interviews and candidate's responses to a questionaire, we were able to let Iowans know where the candidates stood.

Right before the election, we released a scorecard detailing each candidate's position on key aspects of limiting the influence of money on poltiics. We promoted the scorecard heavily through our digital channels and created individual share graphics targeted to supporters of different candidates that they could share online. 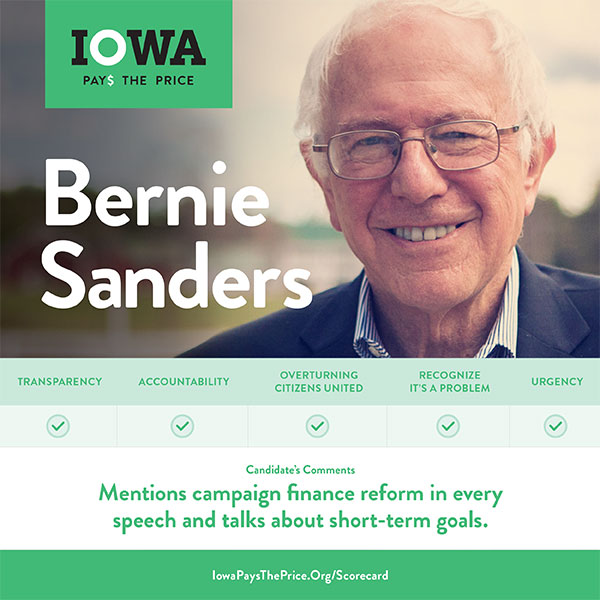 Let's Get In Touch!

Ready to get to work? Let's start building a strategy to acheive your goals.